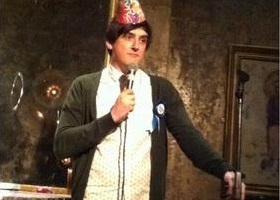 Hooray! What a splendid night we had last night. John Kearns opened in his own unique way. We love John, he lights up the room like an electric eel lights up its tank. He’s also bloody weird too. Nish Kumar fresh from selling out the Soho theatre last […]

Tony Law’s conquest of the comedy world continued as he picked up two prizes at the Chortle Awards 2013. Following his nomination for Best Show at the Edinburgh Fringe 2012 and numerous television appearances, Law has been climbing the comedy ladder and was awarded both Best Club Comic […]

Latitude – the Waitrose of Britain’s summer festivals – has announced its comedy line-up for 2013. And boy is it a good one. The musical may be lacklustre (Foals and Bloc Party to headline?), but you’ll likely be too busy laughing at Daniel Kitson, Tim Key and Dylan […]

The What Not comedy podcast launches

I know we’ve been a bit quiet on the podcasting front of late (due to a combination of business, laziness and fear of talking to people), but to fill the void, we heartily recommend the What Not Podcast. It’s a new project from two of our facourite coemdians […]

Comedy shows coming to the BBC

Some of our favourite acts are now involved in some very exciting radio projects for Radio 4 (my Dad’s favourite radio station bar none). There is still space to apply to be in at the audience and the tickets are FREE for all of these, so I suggest […]