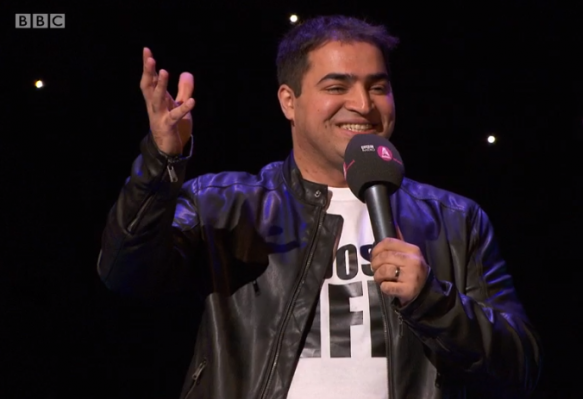 I’m doing great. How are you? [‘Very hot and tired, but thanks for asking’ – Ed]

It’s close. I was deliberately vague as I knew the last few months would shape the show more. But the title still fits. And the show’s still funny. So ultimately…that’s all that matters right? Right…? Hello…?

They did. When Pakistan become the number 1 team in test cricket, albeit for a brief 3 week period, after a long hard 7 year journey… I felt thrilled… inspired… moved… that was the big momentous event on 2016 you had in mind innit?

I’ll be honest. I’m not really sure who else is in the flat this year. I always stay at the same place. Creature of habit. Plus proximity to various 24 hour kebab shops that also serve deep fried mars bars. I suppose my flatmates will see me nipping out every other night and guilt me into not eating such disgustingly unhealthy food every night and ultimately save me from early onset diabetes.

There are so many shows I’m excited about seeing that if I started listing them now you’d run out of bandwidth. You’d have to upgrade your webstorage package and your broadband contract. And I wouldn’t do that to you man. You’re good people Laugh Out London. You deserve more than that. So let’s just say

Walking 5-10 kilometres a day gets those ankles nice and toned. Plus my flat’s a five story walk-up with no lift. So anyone want to see a nicely toned ankle…you know where to go.

(Just to be clear, I mean my show…not my flat).

Also, it’s a great chance to catch up with friends. The Edinburgh Fringe is like a high school reunion. Except you all do the same thing. And you can go to Nandos after…

George Michael. Grew up listening to his music. Older was one of those albums I played on loop when I was a moody teenager. When I did my first comedy show in London, I wrote a parody of his song ‘FastLove’ called ‘Fast Food’. I sang it as a tribute to him at a BBC Comedy show in January this year. Got a bit emotional. Watch it. It’s on YouTube.