David Chapple and Carole love comedy, to an almost unhealthy degree. David is the current Guinness world record holder for most Edinburgh shows watched during the festival when he saw 304 shows over the course of 27 days. This year the couple are attempting their “70707” challenge, looking to see 70 different Fringe shows at 70 different Fringe venues in Edinburgh in just 7 days.

But since the fringe is still months away David and Carole have gone even further! They are currently attempting 70 challenges in the 70 days running up to the fringe all to raise money for the excellent mental health charity Mind. The next one is on Tuesday 25th April, to celebrate the triple 70th birthday bonanza of Kiki Dee, Dick Fosbury and Rob Reiner. David and Carole are collaborating with Weirdos comedy to do a show involving Stonehenge (in honour of the Spinal Tap classic), ‘Don’t Go Breaking My Heart’ and a Fosbury Flop.

The results are going to be intriguing. We sent Weirdos head honcho Adam Larter to speak to the couple to find out about their challenges and love of comedy.

Why are you doing all your crazy challenges?

In 2014 we set a Guinness World record at the Edinburgh Fringe seeing 304 shows in 27 days. The biggest regret regarding this was that we didn’t raise a lot of money for charity while doing it. It was such a challenge to organise, all of it was spent planning with no time for anything else. We wanted to rectify this at this year’s Fringe so came up with the idea of doing seventy shows at seventy different Fringe venues in seven days. Hence the 70707 hashtag.

Then, around Christmas we thought it would be fun to make this into 70 challenges before the Fringe involving the number 70 as the ultimate challenge would be at the 70th Anniversary of the Fringe. We chose Mind as a charity as Dave has suffered with depression his whole life and we wanted to do something positive. Some of the challenges have been silly and frivolous, but some have been life goals and helping to get our own lives back on track. For example, Dave weighed in at 21st 1lb on New Years Day and set a target to lose 70lbs before the Fringe – at the time of writing he is already 50lbs towards that target. 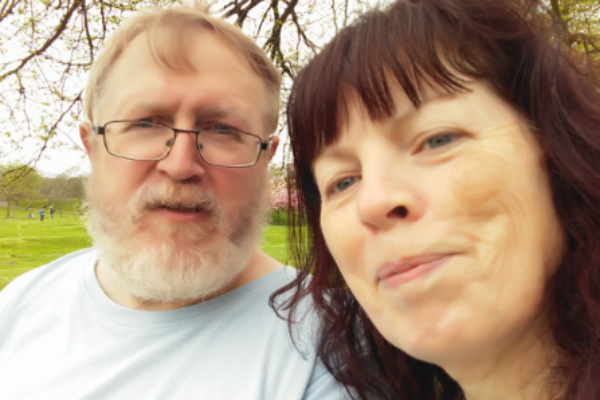 Your challenges are pretty nuts, where do you draw the line?

We haven’t found the line YET. Dave is already planning to open the 70707 challenge in Edinburgh at Spank to help promote the challenge. If you know the show, you know where this might go! He has also already offered to let someone shave him bald if they donate £70 to Mind (any takers?)

You watch a lot of comedy, where do you sit?

We have tended to sit near the front so we can immerse ourselves in the performance. We also sometimes prefer the second row so we are not in the firing line but still feel fully immersed.

Where is your favourite venue for comedy?

This is quite a difficult one, we don’t tend to have a favourite local venue, so prefer our trips away to London, the Fringe or Machynlleth. If we were pushed on a favourite local venue it would the the Watermark, Ivybridge as the management are good comedy fans, although their shows tend to be touring acts.

Where is the worst venue for comedy?

There are many of these locally to us. We have a big problem with standard comedy nights in that they tend to be booked months in advance and either we cannot find out the line up, or acts tend to pull out because they have a more profitable gig closer to London where they are based.

Why aren’t you on the Edinburgh Fringe Comedy Award panel, you probably watch more comedy than they do?

We did apply for the public Fringe panel places a few years back after the record attempt and subsequent award, with a hope of being accepted, but did not even receive an acknowledgement or polite rejection. We tend to plan so far in advance for the festivals that if we waited for the awards panel and were not successful, then we would simply not be able to afford to go.

Who would have been nominated for the Fringe award last year if you were in charge?

Last year was a great year for us; there were many memorable shows, but we think for imagination and endeavour we would have gone with Paul Currie, Mat Ewins and Pat Cahill.

Comedians are always getting asked to tell people a joke – do you ever get asked that?

Occasionally, but we prefer to leave it to the professionals.

Have you seen any of these comedy classics? – Ken Dodd – Roy Chubby Brown (fully aware he is a racist) – Pam Ayers – Lembit Opik

We have seen Ken Dodd twice. He lived up to his legendary status both times with multi-hour performances. His jokes are from books, but he is a lovely man and a true entertainer. We would not consider seeing Roy Chubby Brown; his material does not appeal to us in any way. Being from Cornwall we have to live with the ‘greatest’ comedian of our area; Jethro. I first saw Geoff Rowe (his real name) nearly 40 years ago when I played rugby and he used to bring strippers along to stag dos and tell a few jokes between the acts. His jokes are the same now, but people do love him, especially down in this neck of the woods and he will sell out venues where much more established modern TV acts struggle. Carole would love to see Pam Ayers.

Oh final question: You’ve seen the show “L’Art Noveau” why should Laugh Out London make it part of their preview season?

We saw Adam’s show as a preview in Leicester in February and it was wildly original and innovative.We absolutely loved it. So much so we have had no hesitation in booking it for the first gig (an all day Edinburgh previews day) we have ever put on. It is superSONIC.

You can read more about David and Carole’s story here, and support it by attending…