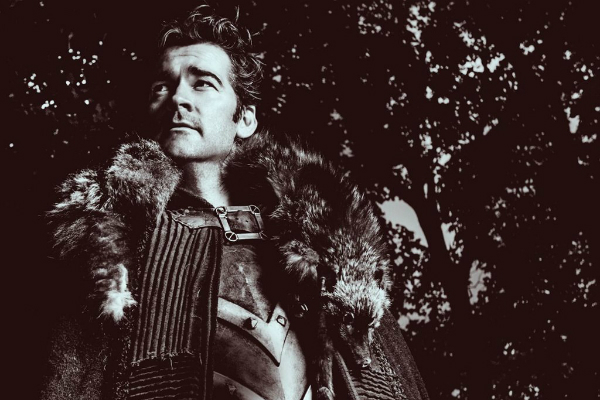 If there’s one thing we here at Laugh Out London enjoy as much as watching comedy it’s listening to it.

Thousands of hours of commuting time has been spent listening to shows like Pappy’s Flatshare Slamdown, Spontaneanation with Paul F Tompkins and the Beef and Dairy Network. And there may be a new contender to the “try not to laugh on a packed train” throne.

Edinburgh Comedy Award winner Adam Riches has launched a new podcast venture that we can’t wait to get our ears on. He dropped by Laugh Out London towers for quick natter about it.

Say what now? Actually, tell us less! My head hurts.

Yep. I should explain…

Yes. You should. Or get the hell out of my mind!

The podcast we’re making is a pretend fan podcast for a pretend television show. It’s a parody, a spoof.

‘The Sword of Maximum Damage’ is a Game of Thrones style show that has taken the planet by storm. Everybody watches it and everybody is hooked. It’s a rating behemoth and no-one loves it more than the characters that host the podcast.

Now you’re getting it!

Barely. Keep talking before my brain drips out of my nose…

Stevie and I play uber-fans that have created their own fan podcast to salute and dissect all things ‘Sword’.

Exactly. We talk, we argue, we theorise, we debate. Every single aspect of every single frame is passionately covered TO DEATH! And after we’ve done that, we then interview two real-life guests from the world of the show.

Played by a host of top character comedians?

Uh-huh, uh-huh, uh-huh. Comedy weapons like John Kearns, Rachel Parris, Tom Parry, Ellie White, Jessica Ransom, Nick Mohammed, Joseph Morpurgo, Toby Hadoke to name but eight. They come in, talk to Stevie and I about the show and then answer questions from the real-life audience that’s been watching us.

The audience are involved too? How unique for an Adam Riches show…

Yes. They play the role of ‘Fans who love ‘Sword’ as much as we do’. I talk to them before we record, letting them know what they have seen this week in the TV show, bring them fully in on the joke and then let them loose to start whooping and hollering at all the guests who they worship as heroes. It’s great fun.

Partly. Stevie and I work from a script that I have already written but the guests receive character bios a few days before to give them a little bit of backstory etc. They then get to add stuff and improvise over the top of an already established format and universe. What they don’t know is what the audience are going to ask them. None of us do! And that’s the really fun part.

And you’ve performed one before I understand?

Yes, as part of the London Podcast Festival back in September. We had Ben Clark from Pappy’s and Andrew Murray from Austentatious as guests and they were fantastic. It worked a treat.

Did the actual audience go with it and ask questions of their own?

Oh yes! Some of them even went one step further and created characters of their own to ask the questions, complete with accents and quirks! They did it in the moment too, which was terrific. It’s one of the reasons I love doing audience participation. Things can happen, ideas can emerge, that are wholly unique to that particular person at that particular time. It makes for an exciting atmosphere and a special tension that I love to be part of.

I do got it. I am now fully up to speed. So when and where can we see it?

We are recording them every Wednesday night at Kings Place from the 23rd Nov until the 21st Dec. So please come down and not just watch the show, be part of it!

And the finished episodes will be released?

Great. Well thanks for confusing then enlightening me Adam.

My pleasure. I believe it’s what I do best!