Christmas interview with Mr B, The Gentleman Rhymer 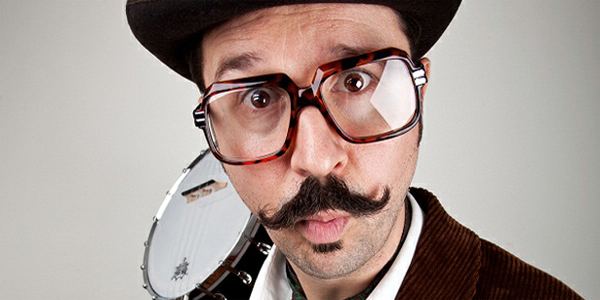 Then head on over to Grotto at The HoHo Theatre on Monday 14th December where you can see Mr B, The Gentleman Rhymer as part of a double bill with cabaret act Topping and Butch.

If you could design a Christmas jumper what would you have on it?

It would either have a reindeer in an Austin Healey Sprite Mark One knocking off a bobby’s helmet or perhaps a couple of parents having a deadly fight over the last Star Wars toy in Tesco’s. Either that or just a decent coloured Fair Isle tank top.

What date do you put up the Christmas decorations in your house and how far do you go?

There are no rules. Last year Lady C and I forgot altogether. Only rule being if they do go up, Andy Williams sings Christmas songs while it happens.

Christmas has been associated with a lot of classic comedy moments, from Morecambe and Wise to The Royle Family. What are your Christmas comedy memories?

Generally it would be a competition between my brother and I as to who would make our nan laugh. I would like to think I won more often than not. Apart from that I do love the german new year tradition of Freddie Frinton and May Warden in ‘Dinner For One’. Google it. It’s ruddy magnificent.

What is the worst present you have received at Christmas?

What’s your suggestion for a Christmas cracker joke?

Which playwright, dandy and bon viveur was afraid of Chroistma? Noel Coward! Eh? I think that is sufficiently dreadful isn’t it?

Are you looking forward to performing in such a unique space as The Grotto of comedy?

I played there last year and it was splendid. I wonder if, as we’re doing it again it will be more dusty or less dusty….?

Crikey. I did play barefoot (not easy for a chap) in a tiny bar in Japan. I was accompanied by a man leaping about in a school uniform and a chap on a washboard. The whole night ended with a ukulele singalong to a tune which was apparently a traditional japanese folk song, but I recognised from the late 70s Muppets Album.

We will be raising lots of money for Shelter this year – An estimated 100,000 children thought to be homeless in the UK this Christmas. Discuss!

Bugger me. What a bunch of utter gits we have in power.

See Mr B, The Gentleman Rhymer in HoHo Hop at Grotto at the HoHo Theatre on Monday 14th December

Tagged as: Grotto of Comedy, HoHo Theatre, Mr B