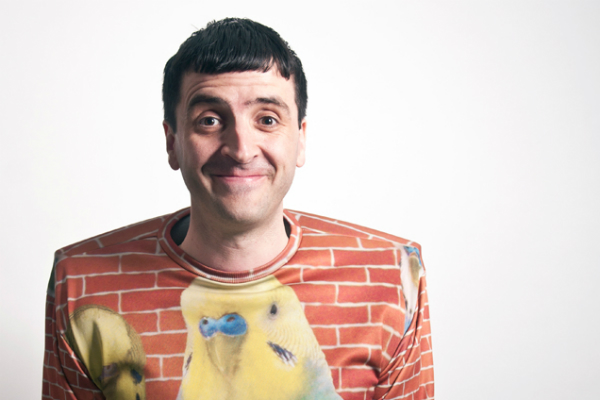 “The kids knick my props, I knick their toys, there’s stuff bloody everywhere.”

This August the Laugh Out London team found themselves waiting in the dank of the Hive in Edinburgh for the main house to open for ACMS. Our attention however was firmly drawn to what the bloody hell was going on next door.

It sounded like there was a conga line at a wedding reception which had somehow got access to a collection of children’s instruments. The clapping, cheering and singing was pretty much blowing the curtain covering the door around like the wind does when a window is left open in an old Disney cartoon.

Thankfully our tickets were already booked for the Saturday night.

Spencer’s show was a brilliant example of the only real limit of comedy being one’s imagination. Very few people could get more than a half smile out of an audience with a box of groan tubes let alone five minutes of pain-inducing laugher. As the Herbert Spencer barely say a full sentence, yet his mixture of clowning and prop comedy is able to say more about himself than most comics do in their stand up.  We caught up with him before his run at the Soho theatre.

Hey Spencer, how the devil are you?

I’m doing alright. My family are all good and I think I can pay the mortgage for the next three months. What more could I ask for? I made a load of flap jack yesterday. I was going to give it to our neighbour for his 50th birthday. But I have hidden it on the top of our cupboard and I am now eating large amounts with out anyone knowing. By the time you read this, game over.

You had an incredibly successful run in Edinburgh, how did you find you time at Heroes of the Hive?

I loved it. I know the Hive can be a bit sticky, but Bob Slayer put a lot of really good acts on and I was very lucky to be on the list. As a promoter he is just getting better and better and to me he’s a loveable bear with a very clever head. His ticketed system combined with Pay What You Want works. Its the best bits of the free and paid models. I even made a bit of money. Which was amazing, considering I had to sell a lot of my possessions and borrow money of a mate to do the show.

“5 minutes in, I am massaging the buttocks of a man I had only just met…”

You have been performing as The Herbert for some years, how did he come about?

I did a clown course at the Soho Theatre run by Doctor Brown. I nearly didn’t go. The night before I was pacing around the flat, chain smoking, worrying about being my age in a workshop with loads of arty people. I fretted with my girlfriend: “You mark my words, they’ll be wearing tracksuit bottoms and walking round with bare feet and talking about emotion and all that shit.” (I took a lot of baggage into that room!)

Sure enough, day one. 5 minutes in, I am massaging the buttocks of a man I had only just met. It was weird. I felt like Karl Pilkington in Idiot Abroad. I didn’t think I would come back the following day but I did. By the end of week I had bought a pair of jogging bottoms, was walking around bare foot and was a completely changed man. Not in a groovy hippy in touch with my feelings way. I just had found the way I wanted to be funny. I got very drunk that night and stopped a fight by massaging a yob’s arse.

Anyway I booked onto the same course again the following week. Then I watched Lucy Hopkins and Carlo Jacucci do their inspiring one hour shows. I then put away all my scripts I had been working on, threw together a stupid costume made up of stuff lying round the house then started going on stage with very simple ideas to make people laugh.

A few months later I did a five day workshop with Phillipe Gaullier in Manchester, and learned a few more things. I still cant remember why I went to the first course. My girlfriend was pregnant with our first child at the time. Perhaps I was doing some crazy things before I had to settle down.

Did you always have it in your mind that you wanted to use props or did it come about naturally?

I never wanted to be a prop comic. I would book new material gigs without having any material. Then on the day I would be freaking out trying to think of something funny to do. I am a bit of a hoarder so the flat is full of stuff so I would start picking stuff up and trying to be funny with it. If it made me smile I brought it with me.

As a guy with a young family how do you balance family life with lugging a suitcase full of props to gigs?

To be honest, I don’t think I am balancing it at all mate. The kids knick my props, I knick their toys, there’s stuff bloody everywhere. In the boot of the car, in the roof box, electrical equipment hanging out of dribbling mouths.

My son waits by the door at night as I am leaving to do gigs with a mini suitcase full of props. What sort of father figure am I?

My girlfriend is the one working her arse off at the moment with the kids, as she did during Edinburgh and in the lead up while I was doing work in progress stuff, and now people want me to make TV programmes! We have mice, the house is still unfinished, the washing machine fills up with dishwasher water and the drains stink of what can only be described as shit. I’m not playing a character on stage. It’s just a version of me that has to laugh at how ridiculous everything is.

And here’s the thing. I only started doing comedy because I thought it would be a good way to be a serious actor! Now I go on stage in white tights, with pipe lagging as shoulder pads wearing a Budgie sweat top I bought while drunk online.

You have experience working in children’s TV (The Bafta Nominated Big Babies), do you feel there is much difference between entertaining children and (possibly drunk) adults?

Big Babies and what I do now couldn’t be more different. Its like comparing playing chess with repeatedly punching yourself in the face. Which one is which? I will leave that for you to work out. The common part though is THE question; Is it funny, how can I make it funnier?

Where did the budgie t-shirt come from? Will you be offering it after gigs as merch?

So I had a look and the company that designed it are no longer making them. I would like to sell them though. I made an album this year to accompany the show. I banged it out in two days with my long time friend and musical collaborator Andy Jones and it sold very well.

I burn the CDs at home and make individual hand written covers to go with them with a different message inside. I thought it would be a nice touch for the few people that wanted to buy them. I ended up having to make hundreds of them in Edinburgh. The ones at the beginning of the run had full track listing and each had a different hand written message. By the end I was doing the bare minimum. Just the letter X. I will have to start making them for Soho Theatre now…. 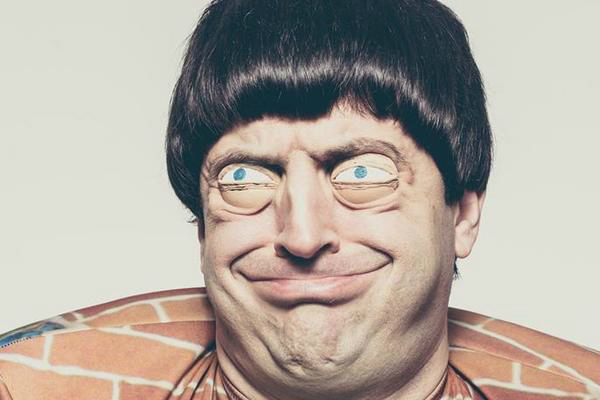 “my home made eyes… They got battered in Edinburgh.”

Do you have a favourite prop?

Not really. I love my musical pedals and loops and instruments. I like my home made eyes. I need to make some more. They got battered in Edinburgh.

Is there a prop you regret buying most?

I accidentally bought 15 suitcases once at Greenwich auction. Always read the label.

Do you come across a potential props for a routine and write around it or the other way around?

Sometimes you just see something and you think ‘I have no idea what I am going to do with that, but if I don’t buy it now I will regret it later’. Then it sits on the shelf for two years. Other times I’m just mooching about with the kid at home and he does something funny and I knick it.

But some of my best stuff comes from a technique my very good friend/advisor/director/fellow idiot Lucy Hopkins got me onto. I told her I had hardly any time to mess about now because of the kids. So she said I have to do 1 hour a day improv with an object as The Herbert in front of a camera. Then watch it back. All of it is crap but there are a couple of moments per hour that make you think ‘Oooooh that could be something”