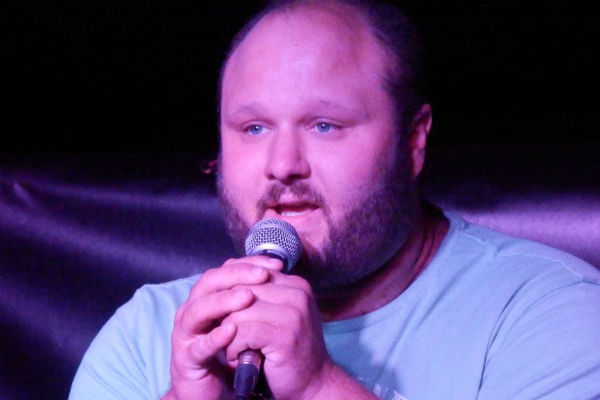 Mark Dean Quinn is a Malcolm Hardee Award nominee for his unique flyering techniques. He’s also a perform of extreme idiosyncrasy. His show this year is one 50 minute long joke. We look forward to hearing the punchline.

Really good thank you. I’m waiting for a courier to deliver three red capes I’ve ordered on express delivery. You can never have too many capes.

Are you ready for another month of Edinburgh Fringe action?

Always. I love the Fringe. I would do it twelve months of the year if I had the chance. I’m not sure you can ever be truly prepared. The Fringe will always throw you a curve ball or two. The first day of the first Edinburgh fringe I ever went to I was hit by a bus. I wasn’t injured but all I could say for about six hours was ‘I got hit by a bus.’ This year Bob Slayer has a bus (the BlundaBus) as a venue at this year’s fringe as part of Heroes of the Fringe. I think this drastically increases my chances of this happening again.

I promise one joke that lasts fifty minutes without a punchline and it’s a promise I can deliver on. It’s called More Observation Without Comedy. People have been warned

What are your tips for getting people to see your show?

In previous years it would be employ me to get people in your show. I was nominated for a Malcom Hardy award last year for my flyering.. In honesty the trick is to stand out from the crowd but without being annoying and never lie just to get people into a show. There is no point having people in the audience that aren’t going to enjoy the show.

Is there anyone in particular you’d like to see in your audience?

The Weirdos are lovely people and great audience members as well as brilliant acts. I love performing to other comedians. I like having a mix of people who know me and first timers

I share with the same people every year. They are some of the best people I know. We take a juicer. It’s a good idea to start the day healthy because it never ends that way.

What’s your topping at The Baked Potato Shop on Cockburn Street?

I try to work my way through all of them except spicy sausage. I think they will be extra busy this year because of the new Freestival venue near Waverley Station

Go to the Robin Williams Memorial Gig for Mind & SAMH at the Liquid Rooms 11.45pm 11th August. The line up is brilliant and it’s your only chance to see the Weirdos collective this Edinburgh Fringe

See me in More Observation Without Comedy at the Banshee Labyrinth 6.40pm daily