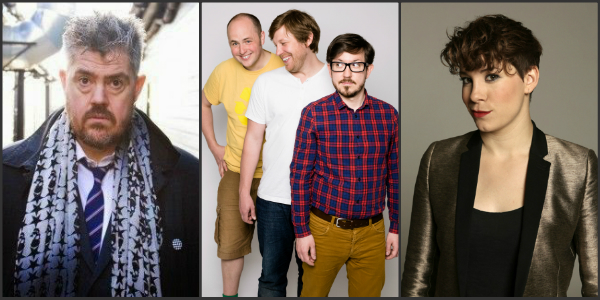 As part of the Laugh Out London Comedy Festival at The Old Queens Head in Angel we are proud to present a very special live record of our favourite podcast Pappy’s Flatshare Slamdown with very special guests Phill Jupitus & Suzi Ruffell!

Pappy’s Flatshare Slamdown is the panel game podcast from sketch team Pappy’s (stars of BBC3’s Badults)and Fuzz Productions. Set in Pappy’s flat – with landlord Matthew Crosby in charge – each episode sees unruly tenants Ben Clark and Tom Parry battle to avoid doing annoying household chores. To help them in this exciting high-stakes contest they force their houseguests (different special guest comedians) to take sides and help them fight it out over a number of stupid games.

“hugely likable and definitely one to watch!” – Time Out

“A real stand-up gem” The Guardian

“One of the finest sketch troupes of the last decade” ★★★★ – Guardian