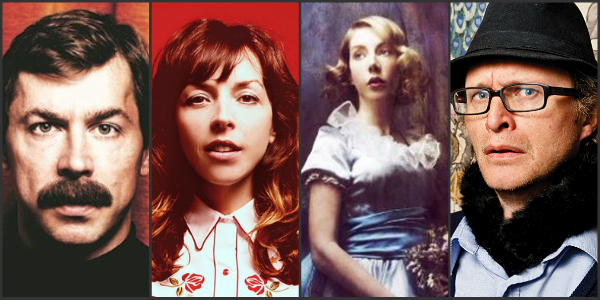 Laugh Out London presents a day of Edinburgh Festival previews from Mike Wozniak, Bridget Christie, Simon Munnery and Katherine Ryan as part of the Laugh Out London Comedy Festival at the Old Queen’s Head in Angel.

BRIDGET CHRISTIE
A Book For Her
2pm

SIMON MUNNERY
And Nothing But
3:30pm

Described by the Guardian as one of “comedy’s enduring eccentrics” Simon Munnery has been a pioneer of alternative comedy for over 20 years.

“One of the funniest, most original comedians of the past twenty years” – The Guardian
“Convention-defying, innovative stuff. Simon Munnery is a must-see” – The Times
“Simon Munnery is an avant-garde comedy god” – Time Out
“Simon Munnery, the God particle of Alternative Comedy” – Chortle

Appearances on BBC1’s Live At The Apollo & Let’s Dance for Comic Relief, BBC2’s Mock The Week, QI and Nevermind the Buzzcocks, C4’s 8 Out of 10 Cats and more.
“Warped wit…striking presence…killer lines… calm confidence” – The Scotsman
“Tiny, pretty…with quite a dark, savage wit” The Londonist
“‘A compelling act” – The List
“Riffs to great effect on serious subjects of the day” – ★★★★ The Independent
“It skirts the edges of good taste, but contains an honest truth… as she adds more depth, the rewards are greater” – ★★★★ Chortle