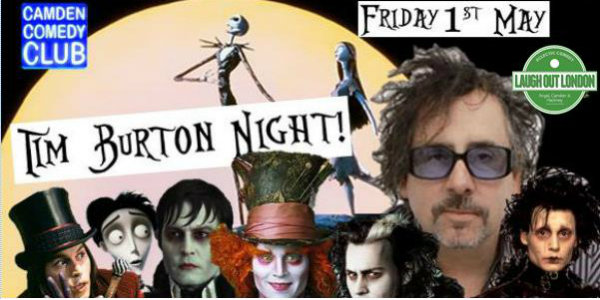 Continuing Laugh Out London’s alternative comedy nights at Camden Comedy Club, after multiple sell out shows on the trot, we are delving into the gothic brain of TIM BURTON!

The night will be hosted by Tim Burton  himself  (channeled through the body of Matthew Highton) alongside his ex-wife Helena Bonham Carter (Gabby Best) and the true love of his life Johnny Depp (Joz Norris).

Some of London’s finest alternative comedians will bring his cult films to life, including lThe Nightmare Before Christmas, Edward Scissorhands, Beetlejuice, Corpse Bride, Sweeney Todd, Alice in Wonderland, the not-as-good version of Charlie and the Chocolate Factory and err…. Big Fish?

“Wonderful Surrealism” – The Guardian, “Highton has the storyteller’s gift”- **** Chortle

“Best’s character comedy is sweet and sharply improvised” – The List

Star of the smash hit ” Margaret Thatcher Queen of Soho”

“The most vivacious presence on stage” – Financial Times