SOLD OUT – Disney comedy night in Camden: the sequel – October 3 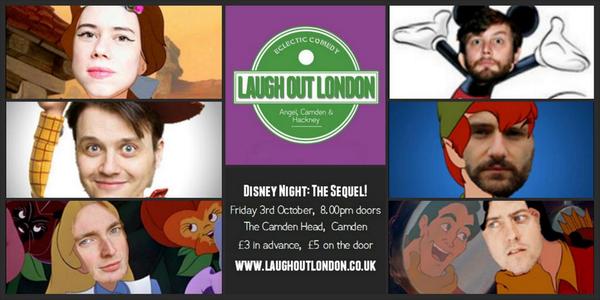 Early this year a host comedians recreated the joy, innocence and rampant capitalism of Disney at Laugh Out London’s Disney Comedy Night.

We’re excited to announce we’re Return of Jafaring it and putting on a sequel on October 3 at the Camden Head in Camden where a host of comedians will be showcasing the magic of Disney through sketch, song and surrealism.

Once again, the evening will be hosted by Prince Charming himself THOM TUCK (Edinburgh Best Newcomer nominee).

Limited returned tickets will be available on the door from 8pm

If you have a ticket please arrive by 8.25pm otherwise we cannot guarantee entry

Joz Norris
“He is a born entertainer, but also a great comedy writer” **** – Chortle

Matthew Highton
“Highton has the storyteller’s gift of being able to make much out of very little, being able to vividly conjure up emotions he felt at the time and get the audience to share them here and now.” **** – Chortle