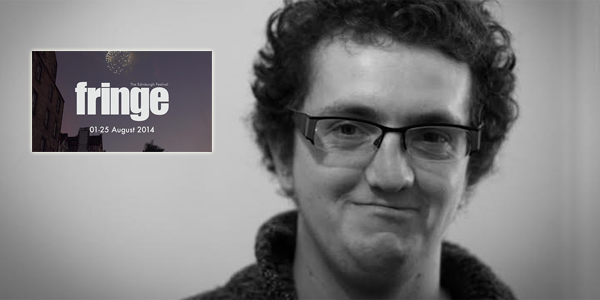 Jonny Pelham has been nominated for Chortle Best Newcomer, finished runner-up in So You Think You’re Funny? and been a finalist and the judges choice in the BBC New Comedy Awards. How about that?

Here he is speaking about his Edinburgh Fringe show.

Hallo Jonny. How are you today?

I am okay, I am on a train to see my sister for the last time before she goes to Hong Kong for two years, so everything seems slightly more pertinent than normal. Also I have quite a bad headache, even though I have drank no alcohol, lots of water and had at least 8 hours sleep – explain that to me Science.  But all that aside I am good.

You’re gaining quite the buzz. Are you feeling the pressure to impress at the Fringe this year?

Not really no – I am mainly excited to go up there and have fun.  I am aware that is the sort of nondescript, boring answer a footballer would give, but it is also true so there is nothing we can do about that.

What can we expect from your show?

Laughter, lots of laughter and probably a bit of sadness and maybe a slightly awkward bit where I had expected the audience to laugh and they haven’t.

You’re performing on a double bill with George Zach. Are you complementary performers?

I think so, I have never really thought about it, I guess we’ll find out. I just Facebooked George asking if he had any thoughts and he told me to tell you that he is good. That is very much what he is like.

What else are you looking forward to in Edinburgh this year?

I would like to see lots of shows – I always say that and then end up seeing about 4. But this time I am confident it will be different, I am planning on writing a list and who knows maybe even a  God-damn timetable, that’s right a timetable, with rows and columns and a bold, underlined sized 14 font, title –  something like Jon’s Edinburgh timetable for watching shows. It is going to be class.

My head hurts and I don’t know why.