If you haven’t heard of Barry Ferns you’ve probably heard of one of his imaginative ideas, whether it’s establishing Lionel Richie’s rightful ownership of most things in the world, climbing up Arthur’s Seat every day to perform a comedy show via a portable PA system or creating a fake review paper to help market his own show.

Now Barry is channeling that creativity into his debut hour at the Fringe, a show that’s been a long time in the works. 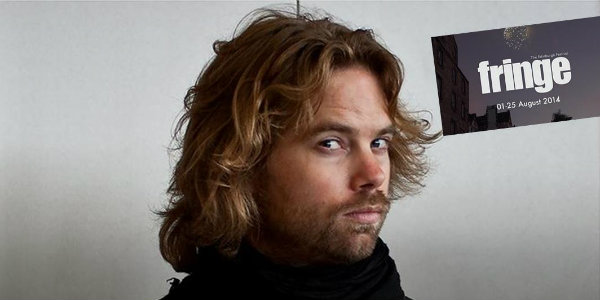 Hallo Barry. How are you?

Hallo! I am in fine fine form. Well as fine form as I can expect anyway, considering it’s 2am.

You’re no stranger to the Fringe but this is your first full hour. What made you decide now was the right time?

I’m always driven by what I have a passion to do, so whether it’s climbing Arthur’s Seat every day,or doing an audio-tour of the fringe, or organizing dial-a-sketch, or making everything belong to Lionel Richie, the idea has always made me laugh/ excited first, and then I’ve made the show. This year the most exciting ideas I’ve had have been in stand-up form. That’s probably because I run one of London’s most popular comedy clubs in Angel Comedy, and I’m on stage there every night of the week trying stuff out. So a stand up show it was. Also, I was told by Tony Law that I had to otherwise he’d hurt me.

What can people expect from the Barry Experience?

An honest show about what it is to be Barry. (That’s me, innit). I can’t speak for all Barry’s, and I wouldn’t want to, we’re an unruly and confused bunch, there would be a fight, and somebody would end up dead – but I will be speaking for me. It will be fun and confusing and surprising, and all the other things my projects are, and it will last an hour, but it will feel like it’s over in about 9 minutes 40. It will also make everyone who watches it aroused (I don’t know why, that just the feedback that I’ve gotten so far from all of the previews)

You’re as renowned for your marketing techniques as much as your comedy in Edinburgh. What have you got planned this year?

I will be making many more fake review sheets this year – the same type that won the Malcolm Hardee Award last year. Amazingly people believed them, so I’ll be writing the most bizarre fake reviews I can, and also making up the best possible reviews for my own show.

There will be other things. I’m toying with a plan of doing a totally self-defeating marketing campaign. Most comedians spend £1000’s of pounds promoting themselves. This year I might be spending my money on undermining myself. Why? Because the idea amuses me… Especially most of my life is spent subtly undermining myself anyway, at least I will be up front and put my money where my actions are!

Were there any repercussion after the fake Broadway Baby review sheet?

There were absolutely no repercussions, in fact Broadway Baby actually tweeted a picture of my fake reviews. Hence me doing it again this year. I think more people should make fake reviews, so that eventually, perhaps no one will know which are the well reviewed shows and which are not, so that audiences will just have to start taking a risk again and seeing people that aren’t on the beaten track. The best Fringe experiences are finding someone just by chance – and sometimes taking in a terrible show can be a brilliant and memorable experience!

Last year you performed every day on Arthur’s Seat. Did you ever feel like you’d made a huge mistake?

Every day at the bottom of Arthur’s Seat, as I looked up with 25kg of PA equipment, a fake doorway and various other things on my back, yes. But once I was up there, and during and after the shows I never regretted it once. The shows were extraordinary fun, moving and funny. People are brilliant, and every show was a happy one and unique. It’s one of the favourite things I’ve ever done in Edinburgh. I’m sad I couldn’t do it again this year. Well I’m just doing the one-off show up there on 16th August at 2pm.

What else are you looking forward to at the Fringe this year?

I’m looking forward to seeing a lot of other people’s shows – people like Rob Auton and Darren Walsh, the real originals with a passion for what they do that most people don’t know. I’m also looking forward to seeing a lot of friends – that’s the great thing about Edinburgh, as a comedian, it’s filled with people you know and meet throughout the year, all in one place for a month. It’s brilliant.

Here’s a space to write about anything you want. Go for it:

Okay – thanks Laugh out London! I’ll go for it. (With your permission) In fact I’m going to have to come clean and say what I said I’d never say… Laugh Out London, didn’t want me to say it, but I think your readers should know. Laugh Out London have said officially that ‘The Barry Experience’ is the best Comedy show they have seen in their history, and that it blew their minds, in fact they enjoyed it so much, they couldn’t write a review of it without gushing uncontrollably, and appearing like they were biased. However the truth must come out. So there I’ve said it. In terms of a 5 star system, they gave it 6 stars.