I’m currently in Edinburgh, hiding ‘neath the bridge. There’s some wifi from a nearby hostel, which I’ve hacked into by correctly guessing the password “MagicDust74.” My boots are filling up with rainwater because I’ve temporarily taken them off to flex my toes, so I’ll have to be quick, but I should just have time for me to post my first exclusive blog for Laugh Out London.

Last year I had to give up on my regular blogs after about six days due to the fact that I had a heart attack and had to give up Dr. Pepper for a month in order to convalesce, so had other things to think about. This year I’m a bit late to start my regular blog, but only because I’ve been busy buying Skittles every single day to throw at people. Anyway, if you remember my blogs from last year you’ll recall that I structured them around pictures of my escapades at the Fringe, so let’s kick things off. 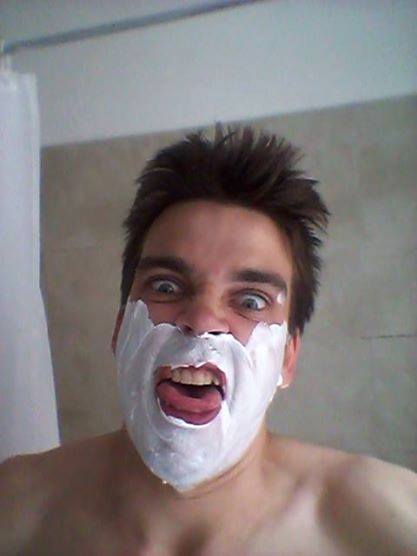 This was taken the morning I left for the Fringe and shows me in my rarely-seen “shaving” mode. I do this most days, and have only recently learned that the reason I nearly always have cuts around my eyes is because you’re not supposed to shave your eyes. I think this picture accurately sums up my excitement and glee at setting off for the Edinburgh Fringe.

This is a picture of John Kearns and Gabby Best, who were two of the first comedy types I ran into once I got up here. I took them to my favourite lovely soup cafe that I discovered last year and drowned my sorrows in. Sadly, exactly as I took this picture there was a massive explosion of light behind them and they were both immediately vaporised as soon as I took this. They are both now dead, and lookalikes have been hired to fill out their contractual obligations to their Fringe shows.

Here’s a couple of Australians and a Scotsman. The first Australian is Bec Hill, who has misunderstood my instruction to look happy and excited to be part of the Edinburgh Party Album and has instead decided to be insolent. Brydie Lee-Kennedy has totally misunderstood and tried to eat her thumb instead of looking excited, while Gavin Innes has decided to look in a different direction and ignore everything that’s going on. A really disastrous photoshoot. 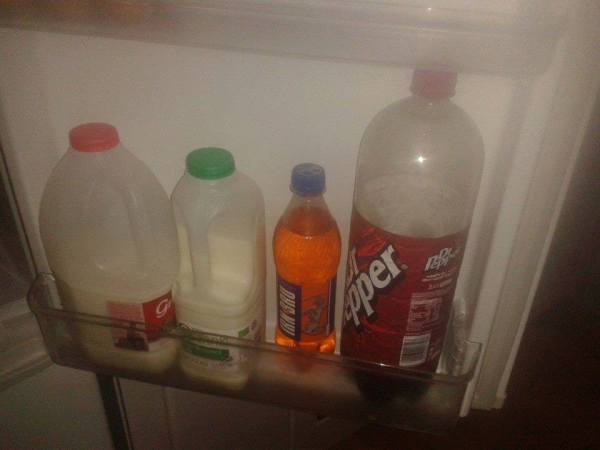 UH OH! LOOK WHAT’S IN THE FRIDGE! GUESS WE MUST BE IN SCOTLAND!!!

I went to see Beth Vyse’s show Get Up With Hands and, because I am a nice guy, asked if I could do anything at the end to help tidy up. She gave me this thing and sent me off to wash it because it was covered in raspberries. I literally have no idea what it is, but it makes me sad, as this picture shows.

And finally, here’s the very same Beth Vyse the following morning. She’s living in the same house as me, Ali Brice and Luke Chaproniere this year, and spent the whole morning going on about how much she wanted a plate of baked beans. I took her to a cafe which I remember as being nice from last year, but turns out to be absolutely bloody horrible. Here’s Beth eating the beans I made her buy. I just had an Americano and laughed and laughed and laughed.