Last year Joz Norris let three of his character creations do the talking in a show that asked audiences to question just who was this aspiring alternative comedian, and where had he gone off to?

Well, he’s here this year, in all his actual human-being glory, ditching the characters to take to the stage as himself (and maybe other versions of himself).

In early previews, it’s proven to be a very wise choice. Here’s Joz on his refound faith in being Joz. 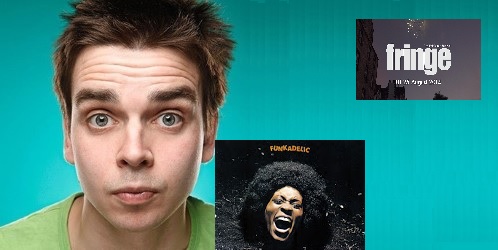 Hello Joz. How are you?

Hey Laugh Out London! I’m really well thanks. I went for a swim at Tooting Lido the other day and I think it’s given me a ruddy complexion and a big dose of vitamin D, so I’m feeling healthier than I have in months. Also, I think I’m slightly bronzed as a result of it. It’ll last about two more days maybe, then I’ll buy another bag of Haribo and start the downward spiral.

You’re heading to Edinburgh again this year. What keeps you coming back?

The bagels. There’s a wonderful bagel place on Nicolson Square that does the best bagels in the UK, in my limited experience (We’re guessing Joz means Elephant and Bagel. We’re not aware if it sells elephants. – Ed). Also, there’s just the fact that it’s such a lovely opportunity to let yourself be immersed in comedy and the arts for a ridiculously long time. It’s the longest amount of time you can go without ever thinking “I need to get some life admin done,” because you’re just obsessively doing comedy for a whole month.

I think the main thing is that I’ll keep on coming back up as long as I feel like I have something I really want to bring up and that I’m proud of. By the end of last year’s Fringe I already had a really strong idea of what kind of show I wanted to bring up this year, so it felt important to come back. Who knows what that’ll be next year, or whether I’ll discover some new idea I really want to work on, but for now I felt I had something I felt strongly about that I wanted to share with people.

Your show is called Awkward Prophet. What is the significance of the title and what can we expect from the show?

It’s named in homage to a name somebody gave me seven years ago in an unfinished poem, so I guess this show is my attempt to follow through on that and see if I can find any significance in it. It’s basically a show striking a balance between me being a kind of wide-eyed egomaniac and a terribly clumsy and shy child, so I think the title does well at covering both those bases.

Essentially, it’s me in a colourful jacket telling stories about my life – mainly about girls and love and relationships – while trying to play around as much as possible. So stand-up and storytelling of a sort, but hopefully very childlike and very playful. So largely it’s a show about romance and growing up that has a Jacques Brel soundtrack and a coonskin hat in it.

Did you consider any other titles for the show?

I briefly thought about doing one of those titles with a pun based on the comedian’s name in the title, because those are absurdly popular. I mean, they always kind of annoy me because they’re so laboured but they’re also hilarious and genuinely quite inspired for the same reason. So maybe ‘All That Joz’ or ‘Joz In My Pants’ or something like that. But to be honest, from early on all the ideas in the show reminded me a lot of those two words from years ago and it just felt right to be called that, so I never seriously considered anything else. My favourite title ideas for next year so far are ‘Joz Norris Sings The Songs That Made Him Famous’ and ‘Prudey Styler’, which would be a song about sexual insecurity and Sting.

You’ve previously done character-based shows, but now you’re being yourself. What prompted such a change?

I think I did characters last year as a route to reminding myself how to have fun onstage and how to do what I want rather than to do what I feel like I SHOULD be doing. But by the end of last year’s Fringe I realised that my favourite bit of the show was a bit where I came out as myself and started playing with a silly “Who am I?” kind of idea, and I wanted to try and do something this time that felt more truthful and just genuinely involved me being silly in my own life rather than trying to come up with imaginary characters or scenarios.

I also did a clowning workshop with Dr. Brown in October and, while it was a really challenging thing, by the end of it I felt like I’d had this tiny glimpse of how to be stupid and silly and idiotic while being totally honest and open about who I am rather than pretending to be a character. The day I finished the course I did a gig for your good selves at Laugh Out London which I still remember as one of my favourite gigs ever as I suddenly had this huge insight into how it felt to channel something really playful while being myself, and I’ve just tried to keep finding that feeling at every gig ever since.

Who would you like to see in the audience this year?

Well last year David Baddiel promised me he’d come and see my show and he never turned up, so I’d quite like him to make good on that promise this time because I feel let down. Other than that, I don’t know really – I met Jethro Tull’s Ian Anderson recently and we really hit it off, plus he’s from Scotland so if he doesn’t turn up I’ll consider it a very personal snub.

Other than see fantastic shows, what would you recommend to someone visiting Edinburgh in August?

Go to the bagel shop, they do really nice bagels. There’s also a wonderful soup place (and I forget the name, shamefully (We’re guessing this place -Ed)) near Bristo Square that does really nice soups in bowls made of bread, which sounds ridiculous but actually just about works as long as you eat it quickly and don’t start by eating the bread. Also, last year when I was feeling a bit stressed and sad I would go up to the top of Calton Hill and sit on the monument and listen to “Feel So Low” by Porcupine Tree while looking out over Edinburgh. I can’t recommend it highly enough, it’s wonderfully cathartic.

Last year you promised to write a regular Fringe blog for us, but you only did six in the end. What went wrong? And can you do the same again this year?

I’m very embarrassed about my failure to deliver on that promise. Essentially, about halfway through the Fringe last year I decided to give up sugar as I’d had ten heart attacks in ten days (they immediately stopped when I removed Dr Pepper (Not a real medical doctor – Ed) from my diet, thankfully). I didn’t realise how hooked I was before then, and a couple of days after I gave it up I started having serious withdrawal symptoms that culminated in a comedy blogger asking me how I was in the middle of the Pleasance Dome and me bursting into tears. I spent the rest of the Fringe trying to hold together my sugar withdrawal while also taking herbal tinctures every hour for a sore throat and continuing to do the show, and ultimately managed to do all three, I feel, to a high standard, but with so much going on I ran out of time to do my regular blogs. This year, with my sugar habit slightly more in check, I will be sure to write you many a regular blog full of hilarious anecdotes, insights and fun pictures! (We can’t wait – Ed)

Well, I’ve talked a lot about the show already so I’m gonna talk about something completely different. I’ve been getting really into funk music recently. My whole life I’ve been a classic rock and art rock fan and never really given funk much of a look-in, but my God, you’ve gotta try it. It’s the most transformative music there is because it believes in this really pure idea of music being able to communicate with your soul and channel good times.

Parliament-Funkadelic are the best ones, because Parliament are really stupid and do these really long songs about Star Child defeating Sir Nose d’Voidoffunk with his Bop Gun and there’s loads of fart sounds in the background and stuff and it’s absolutely incredible, but then Funkadelic are actually really profound and moving. They’ve got this one song called Maggot Brain that’s all about confronting grief and another one called Good Thoughts, Bad Thoughts that’s all about triumphing over adversity and solving any problems by having the right attitude. Funkadelic say “Free your mind and your ass will follow,” which I think is a good message, and Parliament say “Round here it’s the law that you got to wear your sunglasses, so you can feel cool.” Between the two of them I think they’ve got life pretty much sussed.