Not going to Edinburgh? Can’t afford the jacked-up train fare? Can’t get any overpriced accommodation? Still want to see some awesome comedy? Well let’s introduce you to The Phoenix Fringe!

From August 3rd to 11th, the Phoenix at Cavendish Square will be swarmed with amazing comedy talent including… *deep breath*

On top of that, Russell Howard will be performing work-in-progress shows on Thursday 8th and Sunday 11th

We had a chat to one of the festivals organisers Tiernan Douieb.

How did the Phoenix Fringe come about?

The very funny comic Tiffany Stevenson came up with it after a drunken night at Old Rope. Like many of us, she is disillusioned with the Edinburgh Fringe and wondered why we can’t do a proper fringe in London where acts don’t pay thousands, or in fact anything, to do it. It’s a fringe by comedians for comedians and fans of comedy. Plus the room is air conditioned which all in all, is probably more important.

Which shows are you most excited about seeing?

There are loads. I’m really excited about Rufus Hound’s new improv show ‘Fiasco’ which sounds like all sorts of madness and of course I’m excited about Russell Howard and Mark Watson’s work in progress shows too. But mostly I’m looking forward to seeing acts I really like do a full hour, such as Nick Doody, up and coming sharp political comedian Joe Wells and the very very funny Angela Barnes. Robin Ince has been telling me about Dirty Book Club too and that’s sounding like it’ll be pretty wrong. Wrong but excellent.

How has the Edinburgh fringe become so expensive for comics?

Without meaning to state the obvious, it’s to do with greed. Edinburgh Council now charges three times the amount for entertainment licences than it used to. That means the Edinburgh venues charge the acts to take the brunt of it and venue hire is very pricey. Add to that the ever rising costs of PR which keep going up as there are more and more shows to compete with. Then there is also the accommodation costs as local residents let out their flats for far more than you’d pay to stay in most places in London in the summer.

The reasons for going to Edinburgh were never to make money, but it shouldn’t be to lose a lot of money either.

Five shows to see at the Phoenix Fringe

The finest comedy podcast on the planet right now! The stars of BBC3’s Badults are in their 4th series of this flat based panel game which always spins into joyful anarchy. Add in some rather awesome guest (such as Richard Herring, Bridget Christie, Rufus Hound etc) and you have a belting podcast.

The delightful Isy has just come off the back of her radio 4 series “Isy Suttie’s Love Letters” which was delightful. Isy is best known for her role as Dobbie in Peep Show, and happens to be a wonderful stand up, her 2011 show “Pearl and Dave” won loads of critical acclaim.

Andy is by far one of the best political comedians anyone can see. One half of the Bugle podcast with John Oliver, Andy has been known in Edinburgh for running his late night “Political Animal” at the stand. He’s a wonderfully sharp comic.

One of the most adventurous comedy acts to emerge in a number of years.  2012’s brilliant Discover Ben Target showed his wonderful array of clowning skills, silly prop work and his eccentric persona. He is by far and away one of our favourite acts. 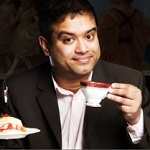 Paul has become one of the most respected stand-up on the circuit. A regular at The Comedy Store and The Stand he is well known for his wonderfully constructed hour long shows and was picked out by Stewart Lee to be on the Alternative Comedy Experience