The short film, starring Kieran Hodgson of acclaimed double act Kieran & Joe, and written and directed by Ben Target and Joe Parham, that has screened at festivals around the world. Target is an Edinburgh Comedy Awards Best Newcomer nominee 2012 and Leicester Mercury Comedian of the Year 2011 and Parham is the honey-voiced comedy writer currently working on shows on Cartoon Network and E4.

Frank is the story of a reclusive young model maker (Hodgson) whose unsettling but deeply touching attempt to attract the attention of the woman he loves (Natalie Dibsdale) is sabotaged by his greatest creation.

The film was made on a tiny budget – no more than a few hundred quid – and shot in Hodgson’s house and the surrounding area with the help of friends and relatives. Everything in the film was built or found by Target and Hodgsone, and Target constructed Frank’s creation, as Frank himself does, out of stuff he pilfered from a skip (including a set of manikin legs, a supermarket trolley and some discarded military medals.) This homemade aesthetic was crucial to the production, look and ethos of the film.

Target and Parham met Stuart Laws and Al Clayton of Turtle Canyone Comedy on the comedy circuit, and quickly realised that Turtle Canyon Films was the ideal home for Frank. Laws and Clayton shared their artistic vision, and brought the technical expertise to make it a reality. As first time directors, Parham and Target relished the opportunity to learn from the more sexually experienced Laws and Clayton. 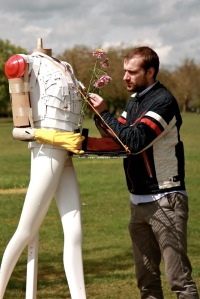 Turtle Canyon Media is a full-service, award-winning production company made up of highly-motivated, enthusiastic people who have a real passion for film. The team has over 10 years of experience each and are based at Pinewood Studios and in Seattle, Washington. They have made ten short films in the last two years and are achieving acclaim and success online and at festivals worldwide. Their knack for identifying and collaborating with exciting talent is making Turtle Canyon Films one of the most compelling and inventive independent production companies working today.

The creative team behind Frank are currently in knee deep with their follow-up film The Bird. Once again directed by Joe Parham and Ben Target. The film stars BAFTA Award winner and cult comedy favourite, actress Julia Davis and rising star Alastair Roberts. It is a tragic yet touching tale about a son struggling to direct his mother’s attention and affection towards himself and away from a garden bird who visits her every day. The team are currently crowdfunding for post-production to help make this ambitious film a reality, any further help would be hugely appreciated. http://turtlecanyonmedia.com/thebird/birdplea.html