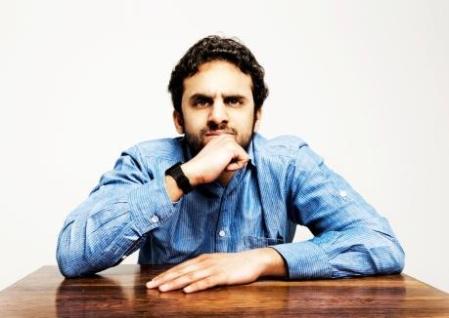 Nish Kumar is a rather talented fellow when it comes to jokes and this whole comedy thing in general (as can be seen here). His debut show won praise from the Guardian, The Scotsman and Chortle and he wrote one of Dave’s top ten jokes of the fringe. He is also part of the LOLfavesTM The Gentlemen of Leisure who were last see giving tours of the British Museum.

His show “Who is Nish Kumar?” is back for a second run at the prestigious Soho Theatre TONIGHT (Thursday 11th April) until Saturday the 13th. So we had a little natter over the internet with him (or a cyber-chit-chat if you will)…

It’s going well. How are you?

So back at the Soho theatre then, are you pumped? How was it last time?

I am indeed as pumped as can be. The last run were some of the most fun gigs I have ever done.

You briefly became an internet meme. How was that for you?

Pretty weird, my poster for this show got turned into a meme by some weirdos on the internet, without my knowledge and became an internet phenomenon. By phenomenon I, of course, mean three of my friends saw it and said “woah that is pretty weird”.

Do people shout “You’re your that confused Muslim!” at you in the street?

No, they normally just shout “stop going through my bins”

Your show is called “Who is Nish Kumar?” at the end do you find out who Nish Kumar is? Is there a little Nish Kumar in all of us? Is Nish Kumar a state of mind?

I’ll answer these in order:

1. You do find out and it turns out the answer is Kevin Spacey and he was pretending to have a limp the entire time.

2. Yes, but luckily it can be removed with a simple surgery.

3. It is a state of mind that is a mixture of zen-like calm and completely unfocussed rage.

You went through a lot of possible show titles before deciding on “Who is Nish Kumar?”, which were your favourites that didn’t make the cut?

Here are the faves and the people who came up with them:

So I Suppose Nish is Offensive Now (Ed Gamble)

Can I suggest “Revenge is a Nish best served cold” for next year’s show?

By all means, but I have already named the show – it is called “Nish Kumar is a Comedian”. WHAT A SCOOP FOR YOU GUYS.

Hey I love scoops! Finally, can you give us a reason to come see you at the Soho theatre this week in two and a half words?

You have convinced us. Cheers Nish!

Nish is at the Soho theatre from Tonight until Saturday