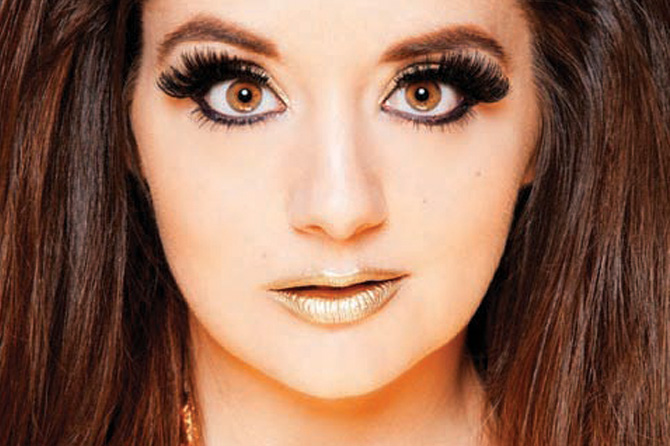 One of Laugh Out London’s very favourite comedy acts Holly Burn is about to start a monthly residency at Leicester Square Theatre in London.

You may have seen Holly at a Laugh Out London comedy night before, bringing her wonderful array of delightful, deviant and dangerous characters to the (often wet) stage, but from Thursday April 4th, you can see them all together at the H Club.

We dare to find out more about Holly in this Q&A:

Hello Holly, how are you?

Hello Laugh Out London, I am well thanks Laugh out London.

So then The H Club then, what’s it all about?

It is a residency show I’ve started at The Leicester Square Theatre. The H Club is London’s least exclusive private member’s club – wot I am host of. You lot can come down and frolic with the club regulars who are a right bunch of old dastards. You can return again and again cause it’ll be a different show each night and you’ll be able to meet new folk each month. An extraordinary amalgam of my old and new characters. It’ll be a bit of a hoot and a bit of a wild evening, an experience the like of which you’ll never have come across before. Do you remember Laugh out London that Groucho Marx famously said “Even though the H Club accepts someone like me as a member I STILL want to be a member- it’s that good!”

Does the H club have a dress code? No trainers?

No Laugh out London did you not hear what I said? ( What sort of an interview is this? It’s almost as though you just emailed me the questions and we weren’t even in the same room…) Obviously anyone can come along and be a member of the H Club as we are non exclusive – we will take anyone no matter what you’re wearing. I mean saying that I’ll probably treat you a lot differently- you might get a free aperitif, for instance, if I happen to like the cut of your jib and all that… but I am a fickle sort so who knows!

You played Tinkerbell in the Weirdos stage production of Disney’s “Hook” over Christmas. Would you say you are better than Julia Roberts in pretty much every way?

You know the answer to this one already Laugh out London. I am better than Julia Roberts in every single way. She was having a breakdown when she made Hook apparently. I have never had a breakdown…. when making a children’s film. She was in lots of films with people like, oooh, that old guy who’s grey ….. oh Richard Gere. His eyes are very small; he looks like he’s trying to see something very far away. What do you think he’s trying to see? And I was in a film once with Jodie Marsh. I don’t remember her having small eyes. I could go on…

Anyway, question: Does Julia Roberts own a private member’s club?

FACT: I am WAY better than Julia.

When we saw your show in Edinburgh we noticed Andrew O’Neil behind us laughing his head off. Which Andrew would you like to see in your audience next?

Andrew Murray – He went to watch Mock the Week – and my show is quite like that . HA HA HA

Prince Andrew – He always seems a shady character. I like the way he just hangs around on yachts.

Andrew Kaufman – But him before he died. I’d love to wrestle him.

Andrew Warhol – I would want him to have done loads of pictures of me like the Liz Taylor and Marilyn ones. What a shame he didn’t stick around. But FYI Warhol – pop art is pretty tacky these days.

And Andrew O’Neill can come back anytime. His laugh is better than anyones…

Holly is bringing the H Club to Leicester Square Theatre on April 4th, May 9th, June 13th and July 10th.