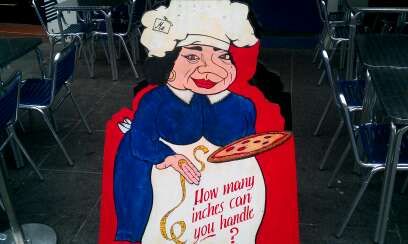 Our second last day at the Edinburgh Festival Fringe 2012, and one of our busiest ones yet.

It all started off with a macaroni pie from Greggs – a treat that London lacks. Fucking London.

Then it was off to see Josie Long and Sam Schafer in Awkward Romance (1.45pm, Mood) – a free show involving tales of love, attempted love, and very much, a lack of love. The audience joined in too, adding their stories about misguided romantic attempts and the romantic things they have had done for them. My story involved a ten hour bus journey and Morrissey.

Next up, a jaunt to see Simon Munnery’s latest hour at The Stand (3.45pm, £10), which further entrenched his reputation as a stalwart of the Fringe with a fantastic, imaginative hour of cardboard animation, song, a short film about wheelie bins, and some jokes.

Then a mad dash over to the Underbelly to see an hour of no-nonsense nonsense with Leads and Stern (5pm, some money) – a sketch duo of real charm and fun.

Back over Princes Street afterwards for another viewing of Where’s Thomas Hardie? (Jack hadn’t been before) and, once again, it was lots of a fun character comedy with balloons and some dancing thrown in (Voodoo Rooms, 7.30pm, free).

And then even more sketchy fun from Checkley and Bush (Just the Tonic at the Caves, 8.55pm) who combined enthusiastic personalities, top acting, over the top characters, games and song parodies in an hour of joyful anarachy.

Finally, Oyster Eyes at the Underbelly (10.25pm) rounded off the evening with some superb weirdness. Go if you like unusual, imaginative sketch comedy that takes a step beyond the norm.